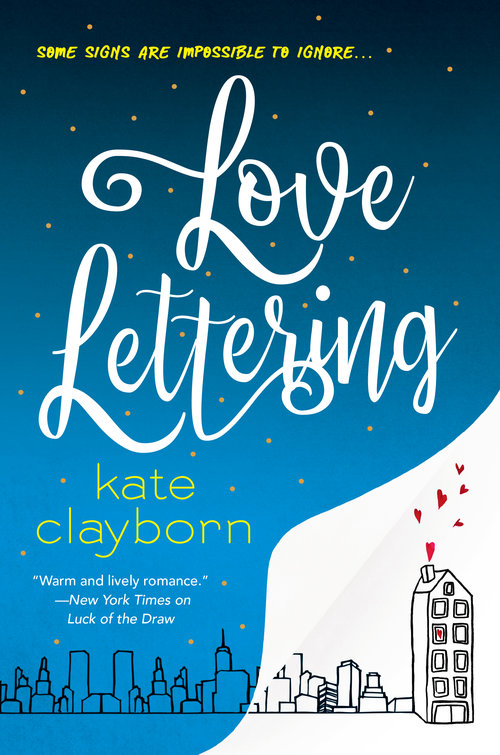 This was one of those happy surprises. I picked up Love Lettering by Kate Clayborn from my library’s new purchases, which can be a bit hit-or-miss. I didn’t expect to fall in love and now I wonder why I’m not seeing this near the top of all the great contemporary romance lists.

Meg is a successful artist in New York, specializing in lettering and famous for custom, hand-made calendars and planners. When she unconsciously builds a secret message into a wedding announcement predicting the relationship’s failure, she didn’t think anyone would notice. But the groom, a mathematician and Wall-Street Quant, lives for patterns, and Meg might be the sign he’s been looking for.

The voice of this novel elevates it well above a summer read. We’re immersed in the mind of an artist who sees the world in colors and shapes, patterns and symbols, and describes them in rich, loving, immersive detail.  Another author might try to set up an oil-and-water pseudo-conflict between the artistic Meg and the mathematical Reid, but Clayborn must know a real mathematician. At the highest level, mathematical thinking isn’t all that different from artistry. It’s about seeing shapes and patterns in the world, and finding meaning in how they interact. It’s as creative as it is precise, and that makes these two perfectly complementary. I recognize a lot of my own mathematician partner in Reid, although he’s a little bit of Meg as well. That might be part of why I fell so in love with these characters.

I didn’t find a lot to not love about this book. The characters have depth and flaws, along with strong, independent goals and motives that weave their way through the central romance. They grow as people, tackling tough issues around communication and trust. The twist is well done, unique, and highly believable, balancing external and internal obstacles to the relationship. The prose is lyrical and artistic, the atmosphere is rich and nuanced, and the sex is amazing.

Not only am I buying a copy for myself for my go-to re-read pile, but I’ve added all of the author’s other work to my TBR.

One of the issues I come across often both in my beta reads and my own first drafts is violation of limited POV.

Most contemporary books are written in limited POV. This means we really get into the head of the main character and experience the world through their eyes. The narrative voice is the MC’s voice, and reflects their perception and frame of the world. For first person, this is more intuitive for us as writers. We’re really putting ourselves in the shoes of our character with the use of “I.” In third person, it’s less so, which is why these three POV errors pop up regularly.

1. The character knows things they shouldn’t.

Key Question: What does my character know and when did they know it?

This refers to events and information about the world and other characters, including the MC’s personal knowledge gaps. My main character doesn’t know about that fight her best friend had with her husband, unless the best friend tells her. If she’s lived in a major city her whole life, she probably doesn’t know what goats eat or whether crops are looking sickly due to drought.

2. The Narrator knows things they shouldn’t.

Key Question: Would the main character in the current POV know this?

Key Question: How would the main character feel and react right now?

Deep POV is a post all of its own, but it’s primarily about being deep in the character’s head for an immersive story experience. The most frequent issues are with distancing language like “felt,” “heard,” and “saw.” The narration is the main character’s voice, and so everything described should be the character’s experience. We don’t need to know the character “felt” something; we just need to describe the sensation and we assign it to the MC.

The other big deep POV violation is when we only see their external behavior (dialogue and some physical movements) and not their internal thoughts, feelings, and reactions to events. I see this most often when the author is trying to hold back a twist from the reader that the character is aware of. I also see it when a writer is uncomfortable being in their MC’s head (usually during either a sex scene or emotional trauma).

There’s no way around the need to have a strong sense of who your character is and how they would think, feel, and react in certain situations. If your character isn’t a real person you can get into, consider some of the character interviews or questionnaires out there as a starting point to round them out with nuance.  Write a few shorts from their POV, capturing some earlier major event in their life to get a feel for them as a person. (These make great bonus material for your website once the book is published).

Read up on deep POV and eliminate telling/distancing words like “felt,” “saw,” “heard,” and “thought” (in all their tenses.) If you describe a sound, we assume your main character is hearing it; we don’t need to be told that they are. If your main character can’t hear it, it shouldn’t be in there at all because it’s a POV violation.

If you really need something in the story, there are many ways around it, but we need to SEE the explanation as a reader and have it make sense to us. This can be “signposting” (as in, “this is where we are and where we’re going next”) or “lampshading” (as in, “I know this is unbelievable so I’m specifically calling it out as such.”).  For example: Your character spent their whole life in a major city BUT had a best friend/aunt/mother into urban farming collectives and therefore knows all too well what a goat eats and how tall corn should be in July.  Your main character’s oblivious but their friend can foreshadow someone in the house by asking, “Did you hear that? It sounded like a door closing.”  Your MC could actually be psychic, although that comes with its own host of plotting issues.

If you find yourself hopping into another character’s head and really wanting to focus on that other character’s thoughts and reactions, consider whether you’ve chosen the right main character. Sometimes alternating POV every chapter becomes too restrictive a pattern and it’s okay to shake it up. Tell the story from the POV that has the highest stakes or strongest internal response to events in that scene. The greater impact of the writing will more than compensate for disrupting the pattern. You could also move the scene to a chapter with that character’s POV.

As with most writing issues, there’s no secret formula and no one right way to do it. The best solution will be one that fits your style and vision for the story.

I don’t usually read YA, but when I was browsing through the library’s new acquisitions in romance, this caught my eye. I might technically call The Revolution of Birdie Randolph romance, but its breadth and depth defy genre. It reminds me of the tarot card The Lovers. While the story is about relationships both physical and romantic, it’s ultimately about choices. It’s especially about whether you will stay true to yourself in making those choices.

Birdie (Dove) Randolph is a high-achieving teen in Chicago, with ambitious parents who dream big for her. But those dreams come with expectations, and those expectations don’t include a boy who’s spent time in juvie, no matter how happy he makes her. When her aunt Carlene moves in after another stretch in rehab, family secrets begin to float to the surface that threaten everything Birdie thought she knew. She must navigate the thin line between who she’s told she should be, and who she wants to be.

I love the queer rep in this book, which includes bisexual, gay, lesbian, and ace characters. It’s sex-positive and fiercely feminist. I also love how none of the characters are all-or-nothing. Each one has nuance and shades of gray. Each one has problems, goals, and growth that doesn’t center around the MC. They’re extremely well-crafted. The MC is richly nuanced as well–she doesn’t fully embrace or fully reject her path in life. She thinks critically, makes both missteps and smart decisions, and carves out her own way that is entirely her own, neither rebel nor saint.

I usually have big issues reading books in present tense, either first or third person. It’s a difficult tense to pull off, and many authors simply don’t. I’ve put down books in the middle because the present-tense execution was too jarring and awkward to carry the rest of the writing. This one jarred occasionally as well, but is overall well done, and it was easy to immerse myself in the story.

Visit Brandy Colbert online for more of her books and where to purchase. Ask your local library to stock it as well!