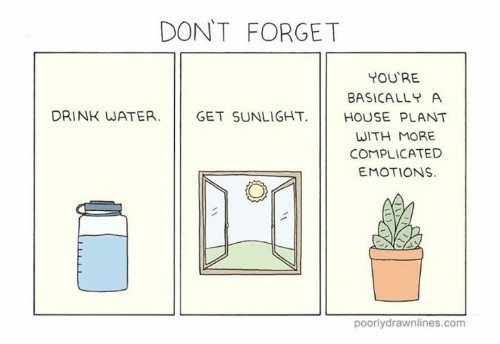 January 2 was supposed to be my big return day from taking December off from writing. But it wasn’t. January 1 was my first day at the gym after graduating from physical therapy for knee surgery, and (as my family and friends won’t be shocked to hear) I overdid it. That plus a big office de-cluttering project meant that on January 2, I had exactly enough energy and pain control to lay on the couch, play Dungeon Boss, and fight with trolls on Twitter.

I had plans. Houseplant said no.

A lot of writers are putting enormous pressure on themselves to “produce.” Whether it’s a certain word count each day, or a certain amount of time on the keyboard, or a book in an already busy month. It is very easy to get caught up in creative flow or bow to pressures of jobs and responsibilities and ignore basic care. I’ve had days when I’ve produced ten thousand words, but forgot to eat or drink and spent nine hours stuck in a single position, staring at a screen. Was that an accomplishment? Was it worth it? Would it have made me a worse writer to produce those words in three days instead of one?

Self care is prioritizing your needs and your body’s needs, but commercialization of self-care has distorted the meaning. Re-framing self-care as houseplant care helps me better prioritize. I need food, shelter, water, movement, and rest. I may not always have the resources or ability to get those things, but some level of them needs to be a priority in the discretionary spending of my time. I may not always get the highest quality of those things, but I want to be mindful, in the give-and-take of life’s demands, that I can’t produce good writing if I don’t have the physical resources to live and grow.