Whether you are traditionally or independently published, a strong social media presence is widely considered an asset for a writer.  Marketing aside, connecting with writers, agents, and editors online is a great way to learn how to navigate the writing ropes. However, a focused approach can help you make the most of your Twitter presence, and keep it from taking up too much of your valuable writing time!  Here are three tips for making the best of your Twitter time.

Communities on Twitter are much looser than the more formal Facebook groups.  To be part of the community, simply search for the hashtag.  Then engage in conversations with those posts, and use the hashtag on your own posts.

Some of the writing communities to start with include:

As you get involved, you’ll find more focused communities, like #AmWritingSciFi, #AmWritingFantasy, and #AmWritingRomance 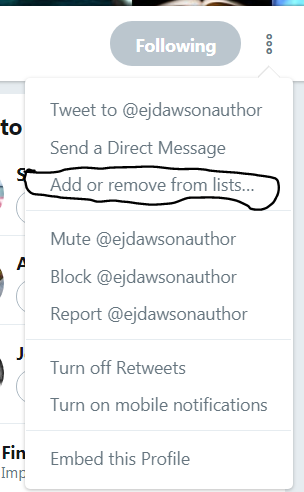 There’s an unspoken (and often spoken) expectation that, unless you’re Stephen King famous, you’ll follow people back who follow you.  That’s how everyone builds their numbers together and supports each other in the writer community.  The problem is that once you have thousands of followers, it becomes really difficult to prioritize engagement.

Sorting your followers into lists helps ensure you catch your favorite follows, no matter how far down the twitter feed their posts end up.  I like to make specific lists for people who post good writing tips, agents, people who engage with my posts regularly, and family/friends.  I can then click on those lists to just see posts from those people. 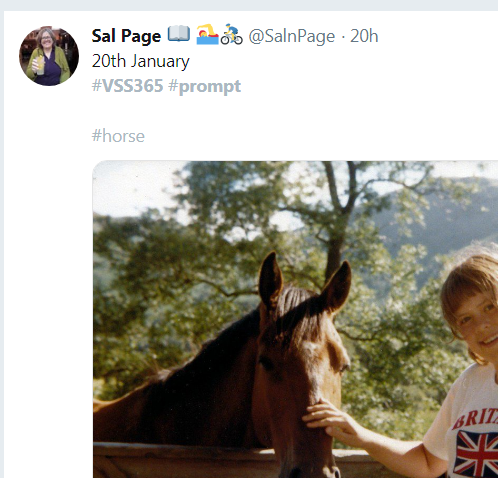 Hashtag games are a great way to engage, and in some cases help you grow your following.  For instance, on Fridays, the writing communities light up with #FollowFriday posts.  These posts list accounts that other writers might be interested in following.  Sometimes these are recent followers of theirs in need of a boost, or people who have recently engaged with their posts.  Give them a follow, and see who follows you back!

#vss365 is a daily writing prompt.  Each day, you can search for #vss365 #prompt to get the word of the day, and use it in a one-tweet length VSS (very short story).  This is a good way to engage with and interest other writers, show off your skill, and hone your craft.

#1lineWed is used to share a line from your current work in progress every Wednesday.  Again, it’s a good way to promote your writing without advertisements, and engage with other writers.

There are dozens of games, so keep an eye out on community posts, and don’t hesitate to ask someone the rules!  The writer communities are generally helpful and eager to include everyone.

Technically a lot of things make up a really good book.  But as a reader, I will forgive an author many plot and style problems.  The one thing I can’t get past is the characters.  Good characters can make an atrociously bad premise readable.  Bad characters can render the most meticulous world-building pointless.

The thing is, as writer, you are the director.  You move all of the pieces of the script, scenery and players around to make sure everyone’s in the right place at the right time for the right effect.  But to really get into your characters’ heads and bring them alive on the page, you can’t think like a director.  You have to think like an actor.  Specifically, an improvisational theater actor.

Any actor, but especially an improv actor, has to have a highly refined sense of timing, place, position, and body language.  They understand the effect of every movement and word they speak.  They know that the position of the shoulders can change a character’s entire message.  That’s something you, as a writer, need to know.

Luckily for those of us with intense stage fright, there’s no need to run out and join an improv acting class.  Instructional books and videos abound.  But my favorite of all time is a classic on which many other books and classes are built.  Impro, by Keith Johnstone, and the sequel, Impro for Storytellers, may be edging on forty years old (as reflected in the sometimes problematic language), but they could give an extraordinary boost to your character craft.

There’s more packed into the books than can possibly be summarized, but here are three examples I use to inform my own characterizations:

Impro focuses a lot on status, because a lot of our understanding of interactions comes from the status games we’re observing.  There are two relevant features in any interaction between people in your writing.  The first is the person’s actual social status.  Are they a king? An outcast?  A woman in a patriarchal society?  The second is the status the person is playing.  We often consider characters or dialogue more interesting when these two don’t match.  A king who acts as a servant and a servant who acts like a king are more interesting than the inverse.

Impro for Storytellers devotes a lot of time to things people do that slow or stop the progression of the story.  One of those things is called “blocking.”  It can be dialogue, action, or even body language that rejects or kills a start made by another character.  For example, a character invites their friend swimming, and the friend says they don’t feel like it.  You may have used the moment to create tension (i.e. to show they’re angry in refusing the invitation) but the action, the progress of the story has stopped, and the second character has attempted to gain control of the conversation.  This can be used constructively, but only if done deliberately, with awareness of the underlying dynamics of control.

In both books, Johnstone is quick to condemn attempts at “originality.”  A person who is trying to be original and clever will end up responding slowly and unnaturally.  In reality the first thought that comes to mind, even if it seems boring, is probably the correct response.  An example from Impro is of an actor being asked, “What’s for supper?”

“…a bad improviser will desperately try to think up something original. Whatever he says he’ll be too slow.  He’ll finally drag up some idea like ‘fried mermaid’. If he’d just said ‘fish’ the audience would have been delighted. No two people are exactly alike, and the more obvious an improviser is, the more himself he appears.”

Your characters are the same way, and will show themselves better and more naturally in unforced interactions than in any attempt to be clever and original.

(Note that I am not adding an ordering link to the books, because they are only available in limited print. It’s worth a bit of hunting to find a cheap used copy of both, rather than pay the collector prices for new copies on Amazon).

This advice has been floating around Twitter and writing blogs for some time now. When you reach the editing stage of your book, converting the text to the Comic Sans font can help you catch those last elusive typos.  For some, this may not be worth the pain of having to look at Comic Sans.  If that’s you, I have good news! The font itself may not be the source of the magic.

Psychologists have focused a lot of research on a unique feature of our brain that deals with attention and perception.  Most people cannot possibly take in and consciously process every sensory feature of our world.  If you were actually aware of every individual leaf or blade of grass, every sound, and every odor, you wouldn’t be able to function.  Instead, our brains use a shortcut.  Most of the things we perceive actually fade into the background and disappear from our memory without notice.  What catches our attention is change. If we walk into a room we see every day, and something is different, we notice immediately.  The change stands out, and our brain starts seeking or constructing a reason for the change.

It’s that moment in the horror movie, where the person living alone comes inside and realizes…SOMETHING’S WRONG.  (That’s not where I left that picture/rug/towel/can of Spam!!!)

So how can we use this to our advantage?

McKeachie talks about how teachers can keep attention on their lectures using what he calls “stimulus change.”  If you break up a wall of lecture slide text with movement, music, or color change, students are less likely to tune out.  This is supported by psychological research on “novel stimuli,” which grabs our attention without conscious control, and helps us focus until we know that the change we perceive is safe.

You can use this mental shortcut to trick yourself into seeing things a different way, simply by presenting very familiar information (your manuscript) in a different way to your senses.  To that end, comic sans works great, because it is drastically different than the default serif fonts most word processors use.  But if you really can’t stand comic sans, any font that looks considerably different will have a similar effect.

On the downside, we do adapt quickly to change.  If you are editing your whole novel at a go, you might need to find two fonts and alternate them between chapters.  A change in color will help add to the effect. This will keep your focus fresh on the words.

But whatever you do, make sure you switch it back to a nice, black, readable Times New Roman-esque font before you send out your queries.  Agents want colorful novels, but that should probably not be taken literally.

Reviews of favorites from my reading list, along with writing tips and advice, beta reading pet peeves, and other tools I pick up along my journey to trad publication.